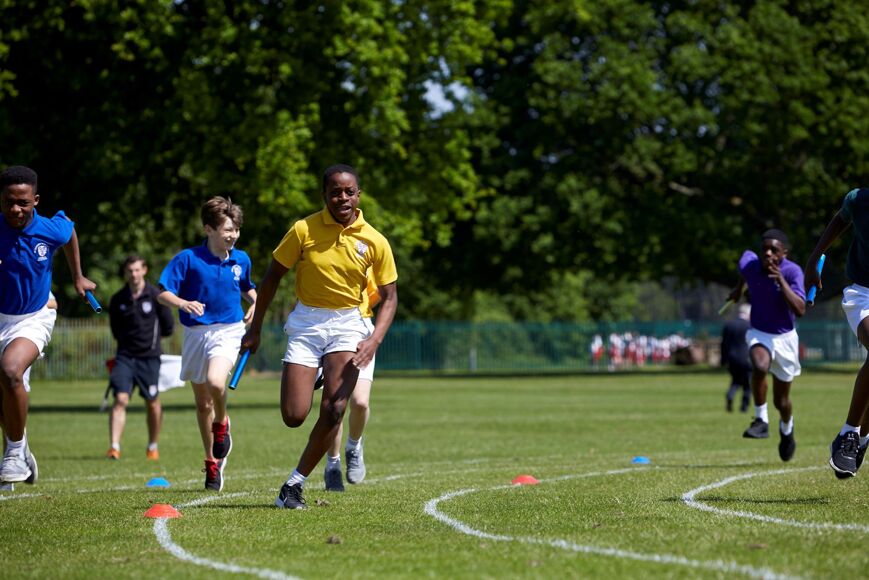 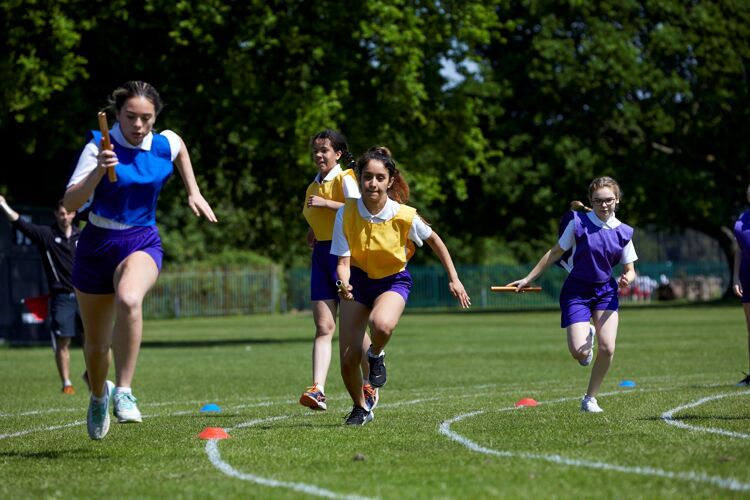 Chis and Sid has a very proud Athletics tradition within which both established athletes and newcomers are welcome to develop and hone their talents.

The School grounds include one of the most well maintained grass field tracks in the Borough and students throughout Key Stages 3 and 4 will have Athletics based lessons as part of the House Points Awards system as well as within a Maximal Performance unit of work.

The School enters Bexley District Competitions for both Cross country and Track and Field where pupils can progress to Kent Schools as well as gain selection to represent Bexley at the London Youth Games. In addition the School enters the prestigious English Schools’ Athletics Association Track and Field Cup and Cross Country Cup with regular representation at Round 2 Regional Finals. The School hosts a wide proportion of the Borough’s top talent but the focus of the Athletics programme is largely based around building a sporting community whereby we can all aspire to achieve our own personal best performance. This is highlighted in our Annual Sports Day where Track and Field Athletics shares the stage with House Pride in a showcase of unity and inclusion within Chis and Sid.

Athletics is a core component of the PE curriculum with extra-curricular training for Cross Country on Wednesday lunch times during the Autumn term which builds up towards the House Cross Country Championships. Extra-curricular training for Track and Field begins in the Spring term with regular Tuesday and Thursday lunch time sessions for throws and jumps with both track and field events available for practice on Thursdays after school until 4:30pm. 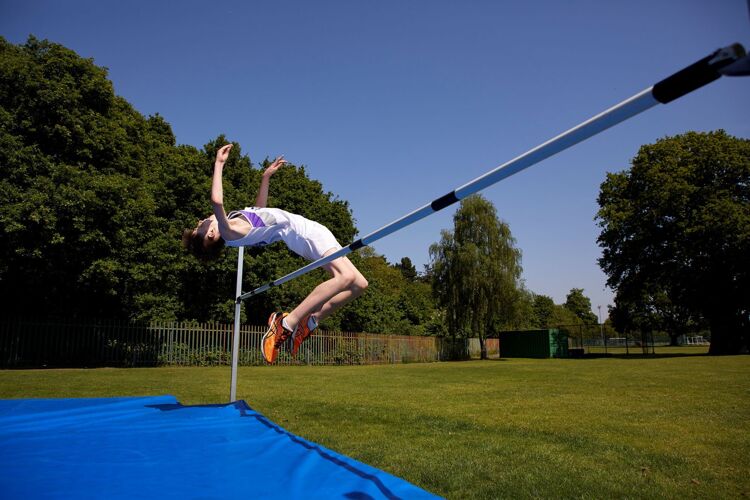 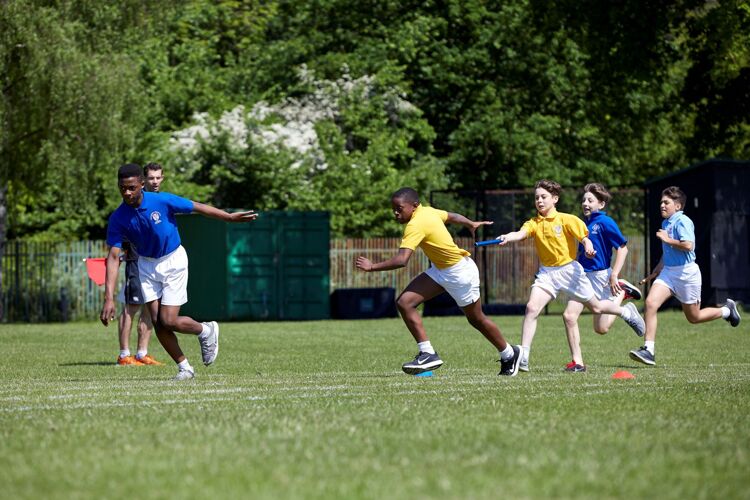 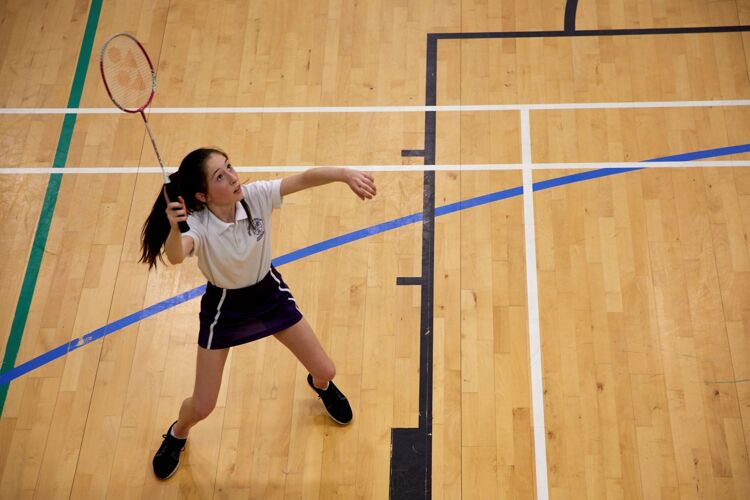 Badminton is played as an enrichment sport. 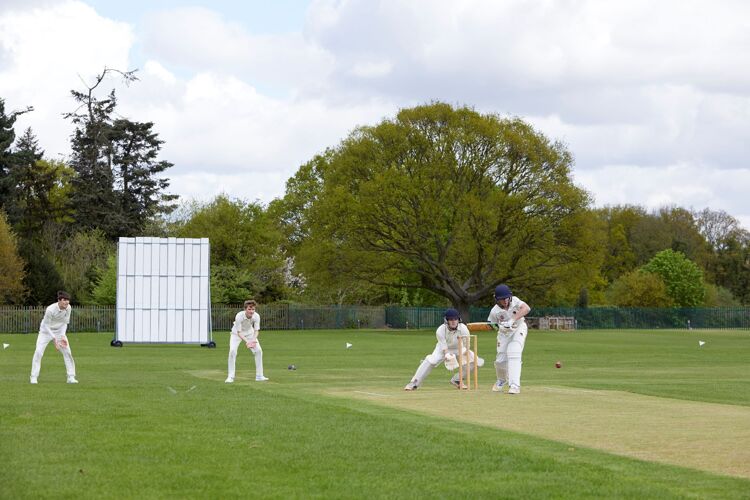 Cricket has been played at CSGS since the schools inception and is woven through the fabric of the Summer term. In 2016 and 2019 the School was voted as one of the top 100 cricketing schools in the country by The Cricketer Magazine. The 1st XI results are published in the Wisden Almanack each year and the M.C.C play the school every season. We enter the Kent Cup competitions from U12 to U15 and the 1st XI enter the Kent League and U19 Lemon Cup. We also run and enter the North Kent League competition and host the finals.

We are the only school in Bexley that play Saturday morning fixtures, which allows us to put out B teams at U12 & U13 level too. As a result, there are many opportunities for pupils to access the game both at excellence and participation levels. In addition, all students play cricket in PE lessons and compete in House competitions. The school teams have boys and girls in them but we are developing the girls’ teams too as befitting the tradition at the school.

We have four Alumni who have gone on to play county cricket, the latest two being Oliver Robinson who plays for Kent and represented England Lions against Australia in 2020. Phoebe Franklin plays in the Kent and South East Stars teams. Each season we consistently have girls and boys in the County and District squads.

The school has two grass cricket squares one of which has an artificial strip too. On the Senior Square, we have a scorebox, sight screens, covers and boundary rope. On the Junior Square we have a scoreboard and cover sheet. We have three outdoor cricket nets and a bowling machine. In the winter, we use the nets at Sidcup Leisure Centre.

As with all Chis & Sid teams, if selected, pupils are expected to support the school. However, players competing at a higher level, such as the county, are given release time and their development is supported by the school. On the field of play, we expect players to be supportive of their teammates and to up hold the laws and the ‘Spirit of Cricket’ as laid down by M.C.C. at all times. This also extends to those watching and supporting the teams. As a school, we endeavour to create an environment where every pupil has a chance to enjoy and flourish at the game.

The school carries sufficient equipment for all pupils, so there is no need purchase the larger items. However, we do recommend that the boys purchase their own batting box and shorts. Should the pupils represent the school on a regular basis we would like them in whites, school crested kit is available from Gray Nicholls. If you decide to buy a bat for your child, it is essential that it has a light pick-up and is not toe heavy, also at the correct height (guides can be found online). The quality of bat is listed from G1 to G4 with 1 being test match level and 4 being entry level. You should also check the sweet spot and if it has been knocked in. Please speak to the PE staff for more information.

The School has undertaken successful cricket tours to destinations such as St.Kitts, St. Lucia and Barbados. 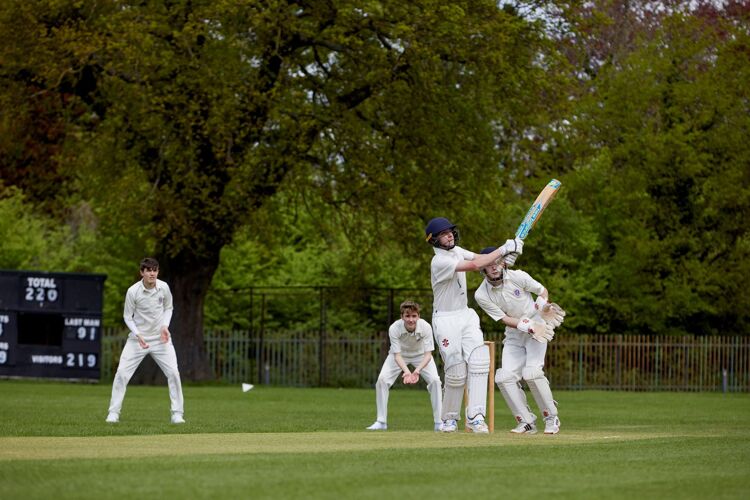 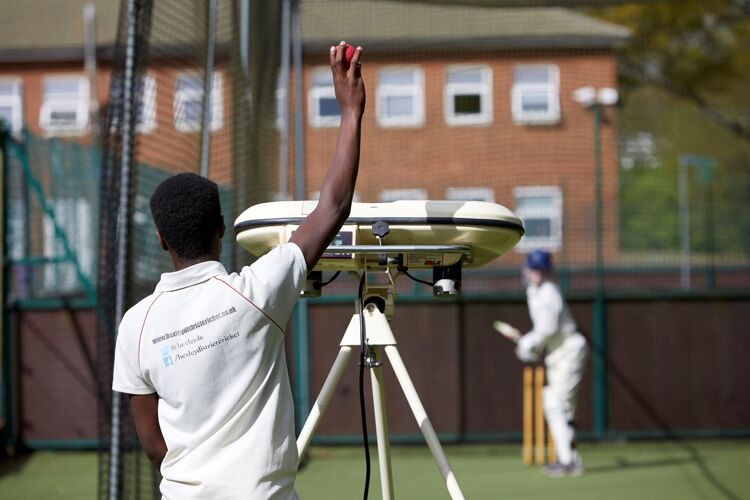 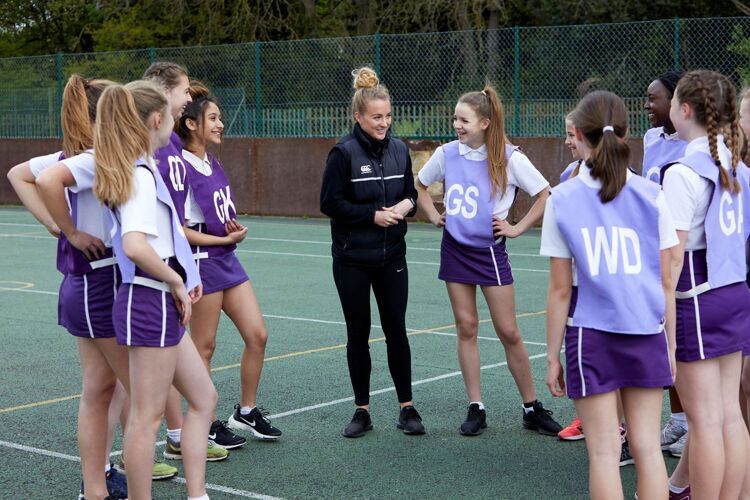 Here at Chis and Sid the Netball community is thriving. With the highest rate of female participation in the school we are proud to offer an inclusive environment for all pupils allowing them to progress within a new discipline, as well as build on crucial character components such as resilience and courage.

The school grounds include indoor playing facilities as well as five full sized netball courts and students throughout Key Stages 3 and 4 will have Netball based lessons as part of the House Points Awards system.

Our teams enter both the Bexley District Competitions across KS3 and KS4 and North-West Kent Tournaments, where pupils have the opportunity to progress to regional competitions and additionally to represent Bexley at the London Youth Games.

With a reputation of achieving great success in the Bexley Borough, our teachers and coaches pride themselves on offering dynamic and creative training sessions, enjoyed by all who attend. Netball is a core component of the PE curriculum with extra-curricular training occurring at lunch times and after school during the autumn term which builds up towards the major tournaments.

The Netball community is supported by the Netball Parents Association who, play a pivotal role in fundraising for resources, such as the recent flood lights and resurfacing project which is due to be completed in September 2019. The association works year round on a multitude of projects and is always recruiting for committed and enthusiastic members to join their team.

In September 2017 we opened our doors to Key Stage 2 pupils from local primary schools, allowing them the opportunity to participate as part of the CSGS Junior Netball Club. With around twenty attendees recruited from our annual KS2 Netball Festival, we are looking forward to seeing this club flourish. In addition we are proud to offer a thriving senior netball programme which compete at school level, as well as part of the Swanley Whiteoak Women’s Netball League on a Wednesday and Thursday evening. Our teams have also undertaken successful netball tours to locations such as Italy, St. Lucia as well as local tour weekends within the UK. 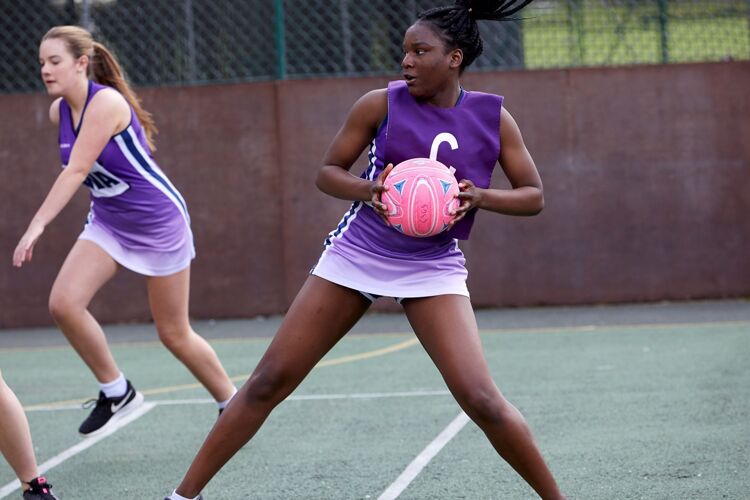 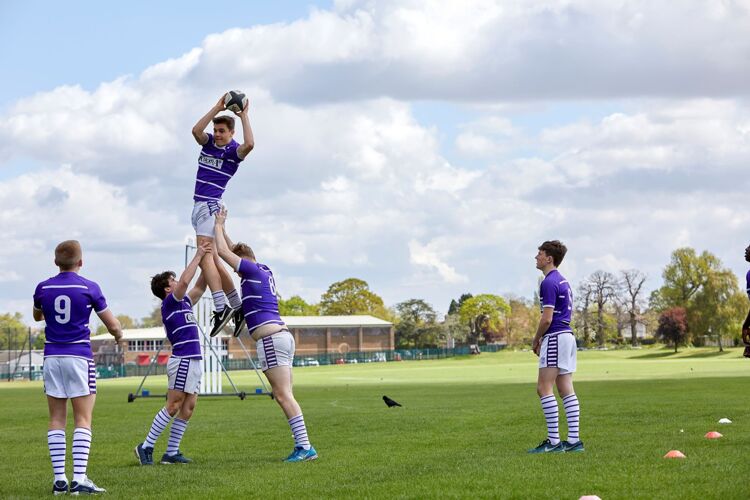 Rugby at Chis and Sid has for many years been acknowledged as our ‘Flagship Sport’ and is highly respected within the Schools’ rugby community.

From September to February half-term, the school regularly fields up to thirteen teams on Saturday mornings, involving up to 250 boys, after which time, our age groups participate in Rugby Sevens, playing in County and National competitions.

The school has five Rugby pitches of differing sizes, allowing all of our age groups to participate in an area suitable to their respective needs. When our players do eventually reach the Senior Squad, they will have an opportunity to play on the 1st XV pitch, which is only marginally smaller than Twickenham!

During the Rugby season, our fixture list contains some of the top Rugby Schools in the South-East, such as Whitgift School and John Fisher School in Surrey, as well as Judd School and The Skinners’ School in Kent. Our 1st XV are always extremely competitive against these teams, winning against them all on a number of occasions and always representing the school with pride and passion. Enthusiastic 2nd and 3rd XV’s ensure that there is always competition for places and the spirit within the group ensures great support for the Captains and leaders within each team.

The Senior boys squad, drawn from Years 11, 12 and 13, always undertakes a pre-season trip, in recent years, alternating between Verona in Italy and Bideford in Devon, where team-building, high intensity training, game plan introduction plus two warm up games provide an all-action introduction to the season. Two Senior players have received International recognition in recent years, while many boys have achieved and been successful at County level from all of our age groups.

All age groups train at least twice a week after school and there are often mid-week Cup games and matches against local schools which provide the staff with further opportunities to include less experienced players; while the year 7 newcomers share three early- season Saturday mornings at Sidcup RFC, our partner club, in an effort to introduce them to the game as quickly, safely and effectively as possible. Support of the school teams is expected.

Our male PE staff run the boys teams, ably supported by a small group of coaches and volunteers who combine to ensure that whatever level the boys aspire to; they will be effectively coached and well advised.

Girls’ rugby opportunities tend to ebb and flow with the levels of enthusiasm each new cohort brings with them and we support when there is demand. We have had recent links with Dartfordians RFC where coaches supported sessions and we hope that the enthusiasm for this will build over the coming years. Tag rugby is played in the curriculum in various year groups.

Chis & Sid Rugby have their own dedicated Parents Association who support the teams on a Saturday morning and fund raise to help support tours.

All members of the PE staff have experience of coaching and running teams.

To supplement this the school is supported by the coaches form Bexley District throughout the winter and summer seasons. This ensures that the pupils receive high quality coaching all year round.

For details on sports fixtures please go to www.csgrammarsport.com